What dishes were prepared for traditional Russian weddings 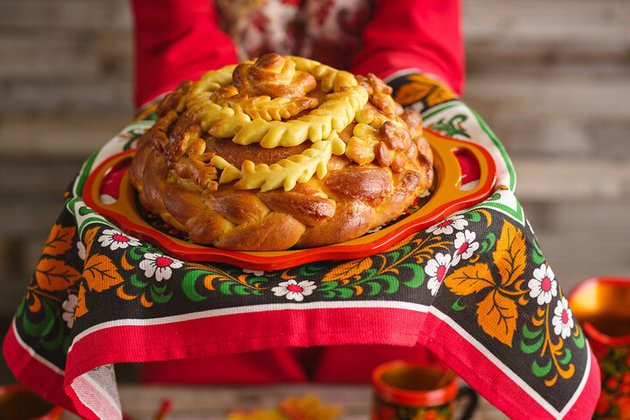 Wedding feasts in Russia lasted from several days up to a week, so the variety of dishes that were presented was a display of wealth of the newlyweds' families and many dishes were meant to bless the marriage with happiness and rich offspring to the future family.

On the first day of the wedding festivities after the ceremony, the newlyweds were treated to a special meal together with their relatives and friends. 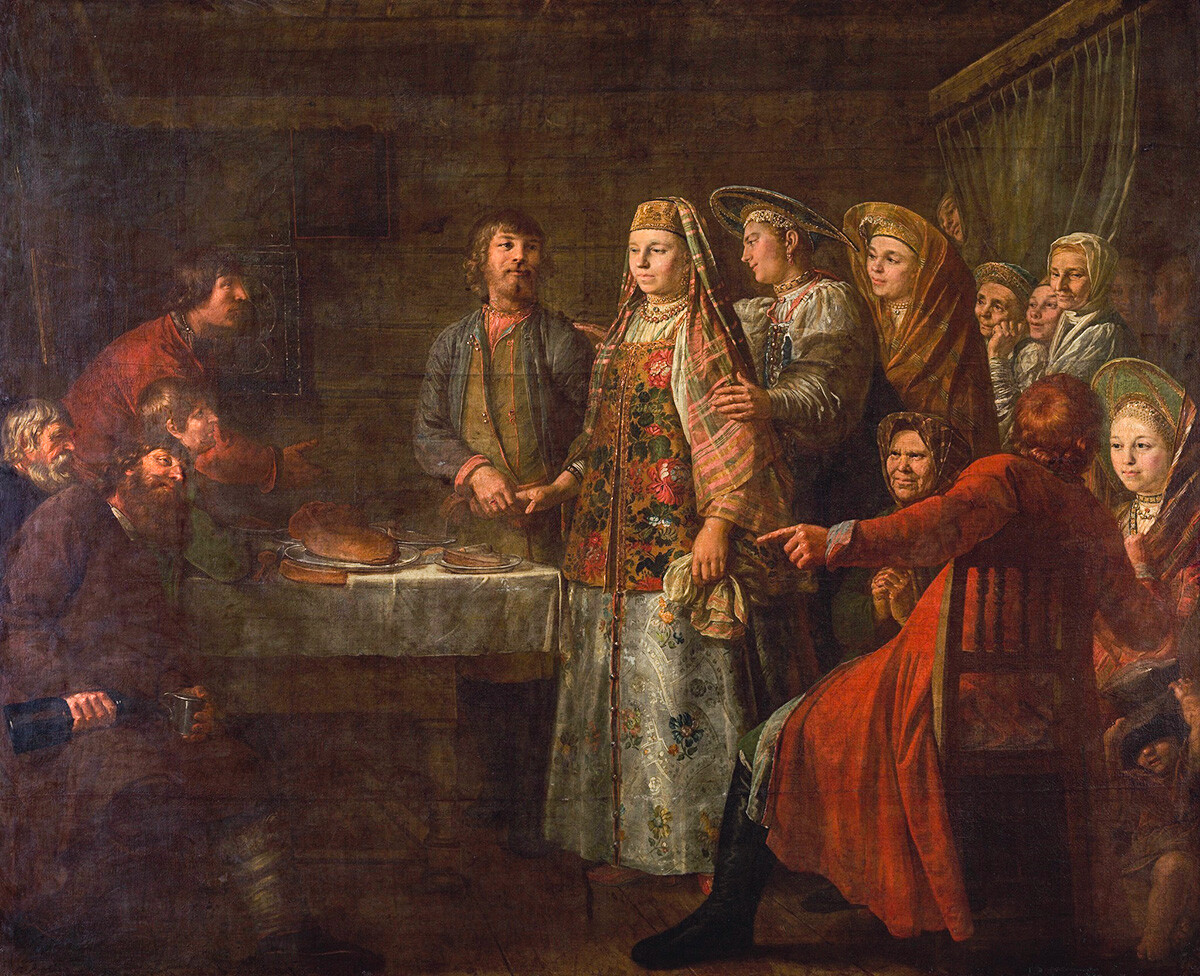 Russian ethnographer Ivan Golyshev described a wedding in Vladimir Region, which is situated not far from Moscow: "All relatives of both husband and wife are invited. The guests are met at the entrance by the father, the mother and the newlyweds. The bride's father bows at the feet of the newlyweds' couplers and hands them a loaf of black bread. Before dinner starts, three glasses of vodka, liquor, red wine or honey are brought out at once - something for everyone to drink". (Bogoyavlenskaya Sloboda of Mstera, Vladimir Province, Vyaznikovsky District, 1863).

Ham, lamb's head and jelly were prepared as cold appetizers. According to Golyshev, goose offal stew was served as a soup. Of course, the choice of dishes strongly depended on the area where the newlyweds lived. In other regions, for example, housewives could prepare cabbage soup, noodles in meat broth or borsch.

The richer the family, the more meat on the table 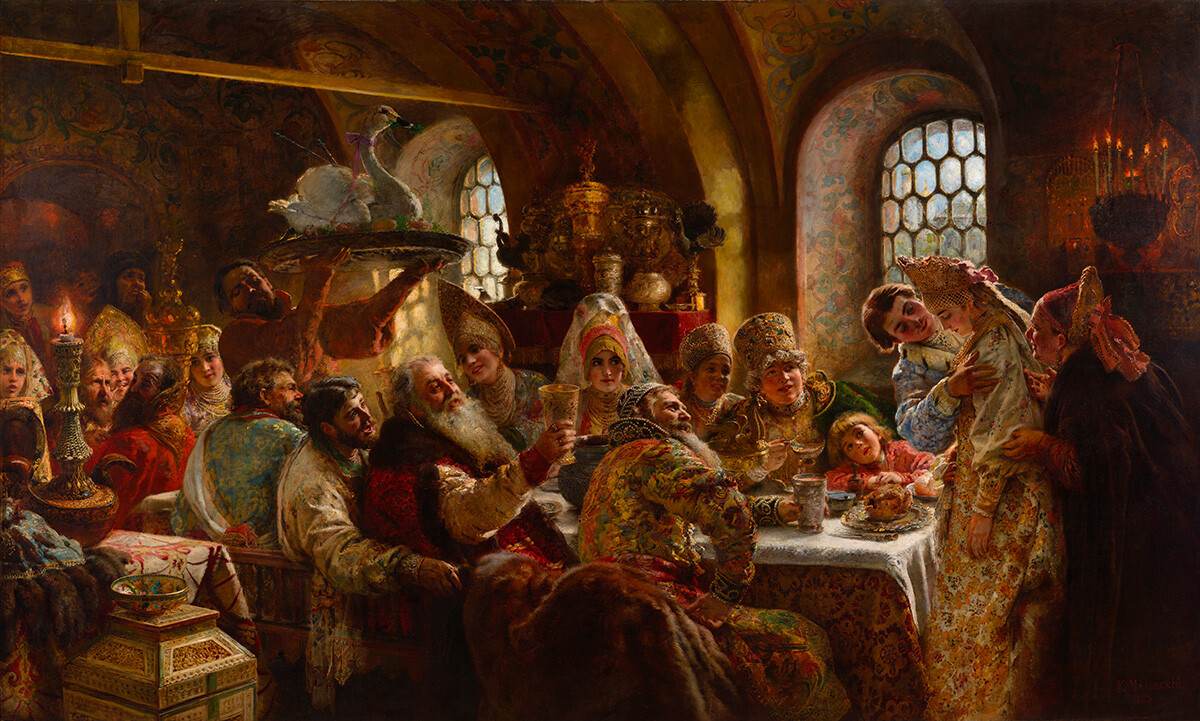 According to Golyshev, millet porridge with various parts of ram, piglet, and goose was served for the main (hot) course. It was believed that the more meat and fish on the table, the richer the celebration was. A piglet would often be slaughtered before the wedding started and all kinds of dishes were prepared from it.

"When the middle part of a ram is served, a newlywed takes a kidney from it, cuts it into small pieces and hands it out on a fork to everyone present. When a goose is served, the newlyweds leave the table to change their clothes", writes the ethnographer.

While the guests ate, the newlyweds did not touch any food or drink. They could symbolically have something small to eat so as not to go hungry. In northwest Russia, young people were given fish pie and milk with cranberries, "so may there be many children, like fish in a river, but they were strong - blood with milk".

Andrei Ryabushkin. Waiting for the newlyweds to be crowned in Novgorod Province, 1891.

Russian ethnographer Mikhail Zabylin describes another interesting tradition in the book 'Russian people. Its customs, rituals, legends, superstitions and poetry' (1880): "A table covered with three tablecloths was placed in front of the newlyweds. One tablecloth on top of the other. On them, salt in a salt shaker and a kalach (donut-shaped white bread) or perepechi (tart) with cottage cheese were placed. When the guests were served the third course, which was a swan, a fried chicken was placed in front of the married couple. Then, the groom's best man takes the fried chicken, wraps it in the second of three tablecloths and brings it to the newlyweds.

The second day of the wedding took place in the groom's house with song and dance. And, on the third day, the newly married wife demonstrated her culinary skills by baking pies for her guests.

Karavai - the most beautiful wedding bread 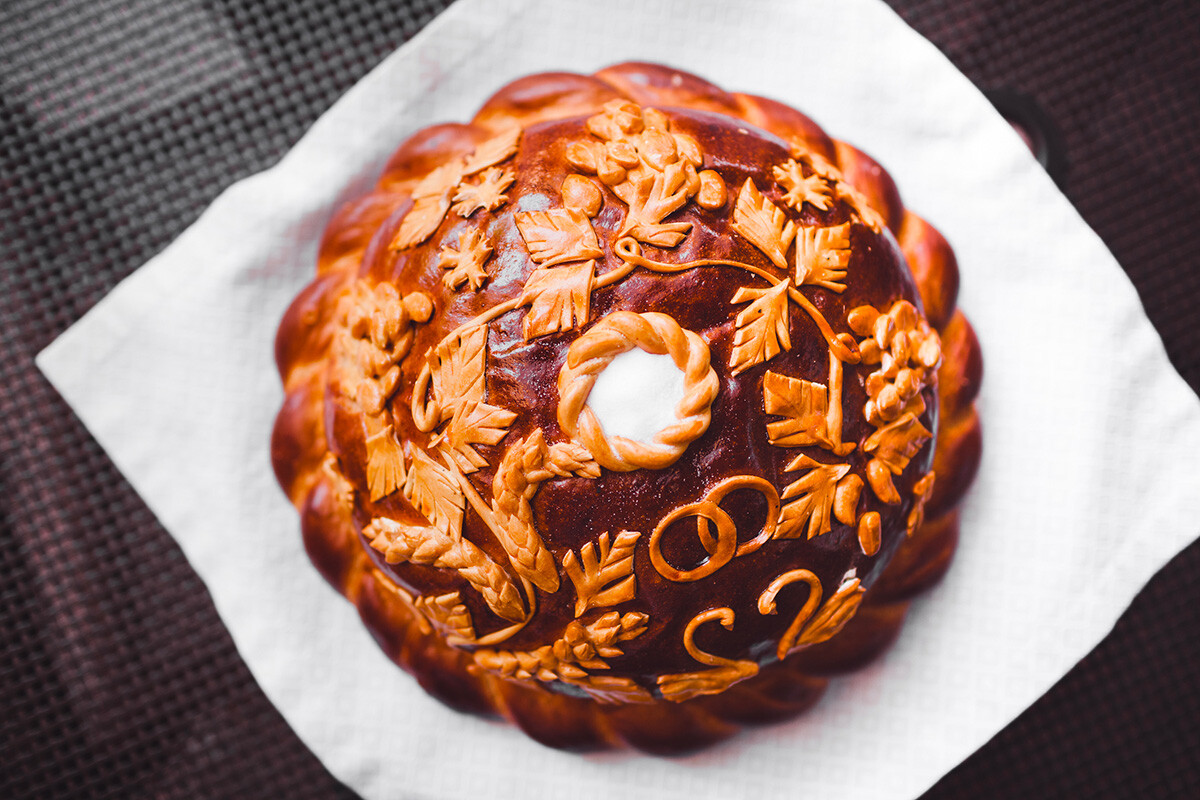 The round shape of karavai symbolizes the sun, a sign of fertility and prosperity.

A former Russian tradition was to greet newlyweds after the wedding ceremony at the entrance of the parental home with bread and salt. This bread - karavai - was baked in a round shape for weddings, and was decorated with braids, flowers and swans made of dough. The round shape symbolized the sun, a sign of fertility and prosperity. It was believed that a karavai should be baked by a woman who enjoys family life and has healthy children, so that the forming of the new family would be as prosperous as the marriage of the karavai's baker.

READ MORE: Why wedding 'karavai' can't be bought in the store, but only baked at home

Each element of decor on the karavai has a special meaning: rings symbolized marriage, spikelets stood for fertility and prosperity, doves or swans represented fidelity, flowers expressed femininity and the viburnum epitomized love.

The karavai was primarily intended for the newlyweds. They would bite off a piece at the entrance of the house. However, during the celebration, all guests shared the joy of the celebration by tasting a piece of the karavai, as well.

A pie in the form of a prince's hat

A kurnik, a closed, layered pie with a filling and a hole in the top, was also considered a ceremonial wedding cake for a long time. It was baked in the form of a quadruple- or octahedral hat, reminiscent of the luxurious hat of Russian Grand Prince Vladimir Monomakh, who ruled in the 11th century. 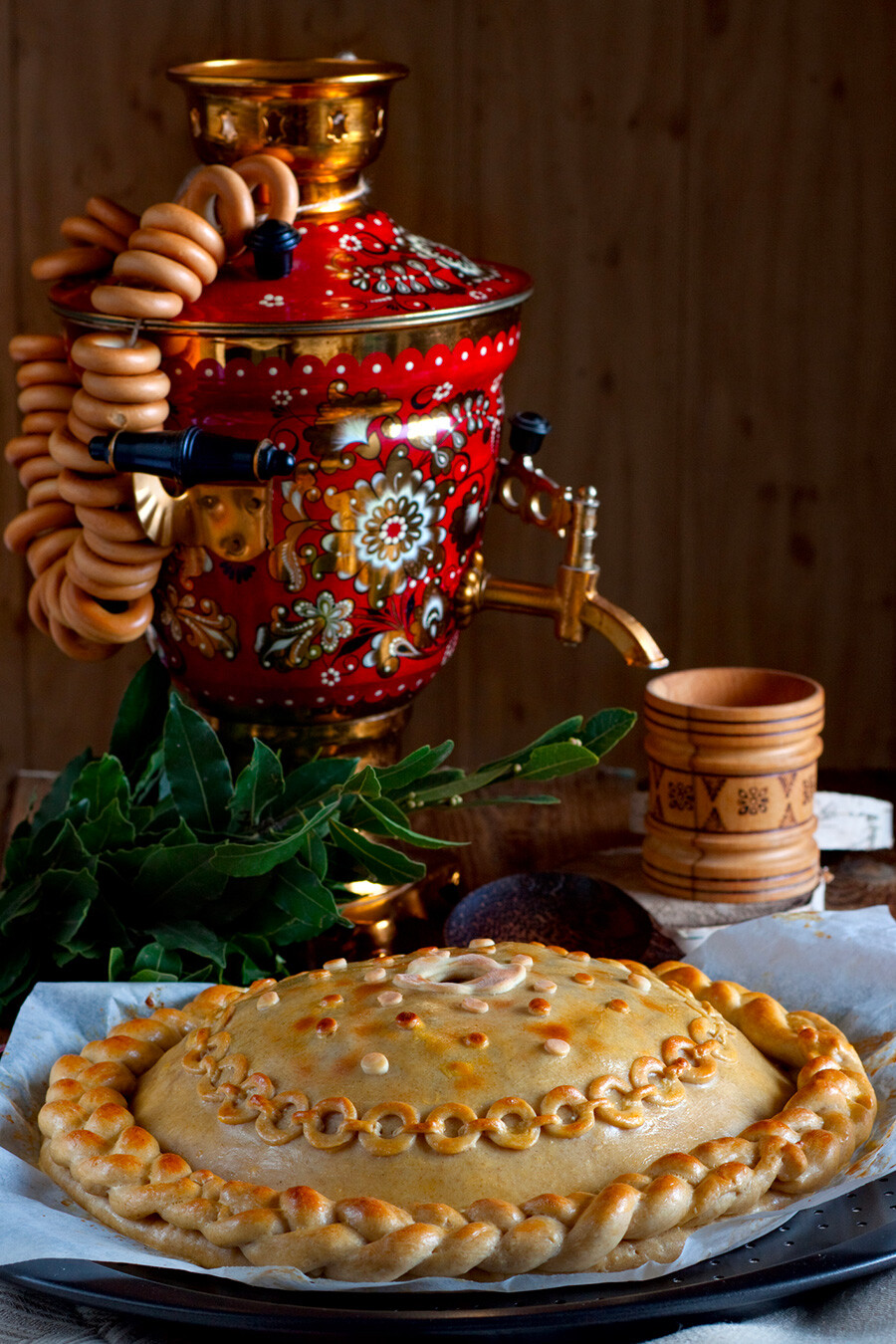 Kurnik, the honored guest at any Russian wedding.

The kurnik was made with a chicken and wheat-grain filling. The chicken or rooster stood for a strong offspring. The wheat symbolized wealth and fertility. Sometimes, shells or chicken bones were put in the kurnik for good luck. In case the wedding was organized by a poor family who couldn't afford to buy chicken, cheaper fillings, such as millet, mushrooms, root crops or cabbage were used for the kurnik. It was a custom to bake two kurniks - one for the bride and one for the groom. The bride's pie was decorated with flowers and birds, a sign of femininity and beauty. The groom's pie was decorated with figures of people and animals, a symbol for a large family and prosperity.

It is said that, in some parts of Russia, it was a custom to break a kurnik above the heads of the bride and groom during the wedding feast. It was believed that the more wheat grains that fell on the heads of the newlyweds, the richer their lives would be.

Next to large pies, there was also a variety of small and open pies on the wedding table, each with different fillings. They were handed out during the feast instead of bread. Sweet pies and gingerbread were baked for dessert. 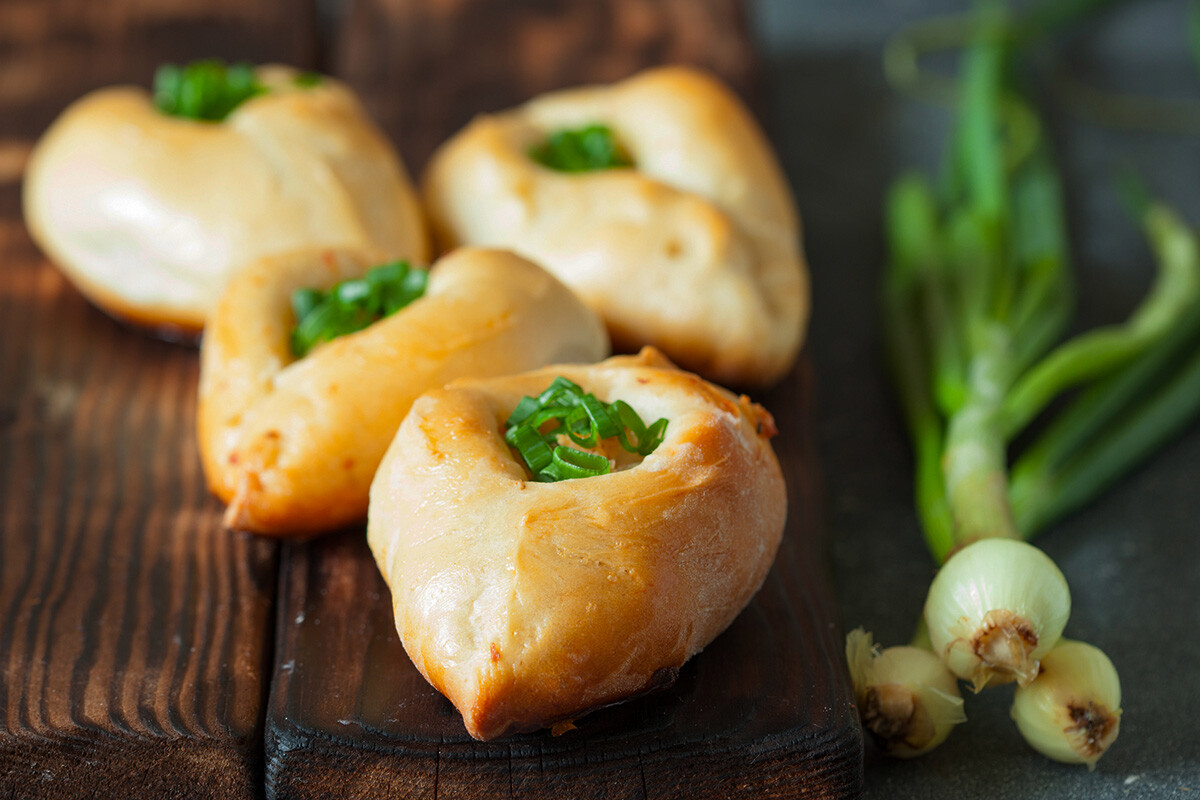 After the October Revolution in 1917, the socialist authorities became hostile towards the church. Religious ceremonies became something of the past in both large cities and villages and many wedding rituals were forgotten. Baking a karavai with salt for newlyweds is one of the rare gastronomic traditions that have survived to this day.

Our website and social media accounts are under threat of being restricted or banned, due to the current circumstances. So, to keep up with our latest content, simply do the following: