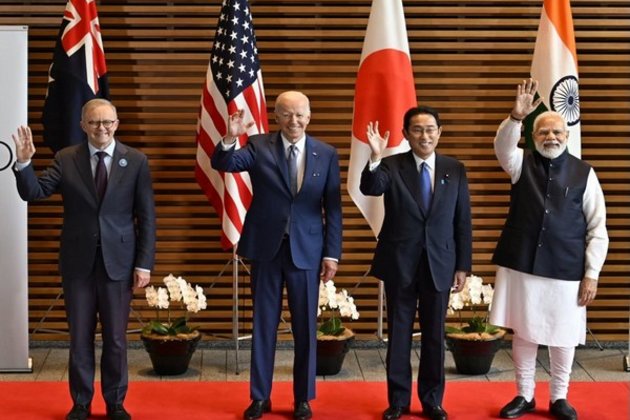 Tokyo[Japan], May 24 (ANI): Quad leaders on Tuesday appreciated India's position with respect to Russia's conflict in Ukraine, Foreign Secretary Vinay Mohan Kwatra said on Tuesday, adding that Prime Minister Narendra Modi emphasized the importance of addressing the problems of food, energy security and humanitarian issues that have been emerging due to the developments in Kyiv.

"There was a general and good appreciation on the position that India has taken with regard to Ukraine which has been an immediate cessation of hostilities, and path of dialogue and diplomacy to resolve the situation. It was very clear, that there was no element of doubt in terms of each country's perspective," Kwatra said at a special media briefing on Tuesday here.

The Quad leaders also focused considerably on the questions of the derivative problems which emerged out of developments in Ukraine including shortages of food, fertilizers energy to disruption of supply chains partly.

Russia launched its special operation on Ukraine on February 24 following which the US and Europe have imposed sanctions on Moscow condemning its war on the East European country.

Separately, in the joint statement on Indo-Pacific Economic Framework for Prosperity, India, Australia, Japan, the US and the nine other countries emphasised commitment to a free, open, fair, inclusive, interconnected, resilient, secure, and prosperous Indo-Pacific region that has the potential to achieve sustainable and inclusive economic growth.

The meeting of Quadrilateral Dialogue (Quad) kicked off in Tokyo on Tuesday to review the progress made by the four-member countries and the cooperation is anchored in the shared values of democracy, international law, and rules-based international order and a vision for an inclusive Indo-Pacific. (ANI)