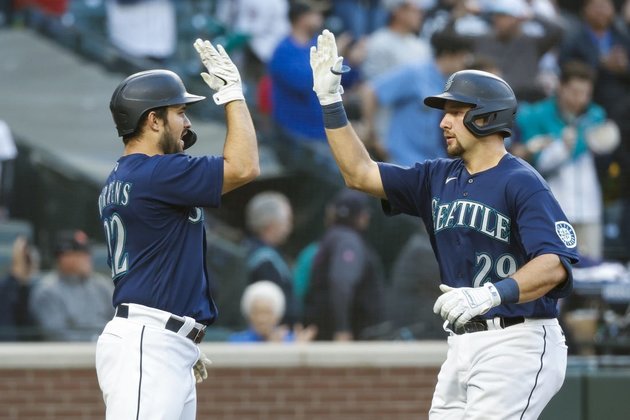 Chad Pinder homered for the A's, who lost their third straight.

Mariners left-hander Marco Gonzales (3-4) got the win despite allowing five runs on eight hits in 5 1/3 innings. He didn't walk a batter and struck out three.

Seattle's Diego Castillo struck out the side in the eighth and fellow right-hander Paul Sewald worked the ninth for his second save of the season.

The Mariners took the lead in the third. With one out, Ty France doubled and J.P. Crawford walked to bring up Rodriguez, who hit the first pitch out to right-center field. It was Rodriguez's fourth homer of the season and his first at T-Mobile Park.

The A's tied it in the top of the fourth. Pinder led off with a homer to left. An out later, Sean Murphy doubled and Christian Bethancourt singled, sending Murphy to third. Kevin Smith made it 3-2 with a sacrifice fly. After Elvis Andrus lined a single to center, Tony Kemp's single to left tied the score.

The Mariners regained the lead in the bottom of the inning. With one out, Luis Torrens walked and Raleigh homered to left to make it 5-3.

Seattle extended the lead to 7-3 in the fifth as Rodriguez grounded a one-out single to right and Suarez followed with a homer to left. Logue got Jesse Winker to fly out to the warning track in right before being replaced.

The A's didn't quit, scoring three times in the sixth to make it 7-6.

With one out, Bethancourt and Smith singled, ending Gonzales' night. Right-hander Penn Murfee walked Andrus to load the bases, and Kemp hit a run-scoring single to center. Cristian Pache then lined a two-run double to left, pulling Oakland within a run. Veteran right-hander Sergio Romo, who pitched for the A's last season, came on and got out of the jam.